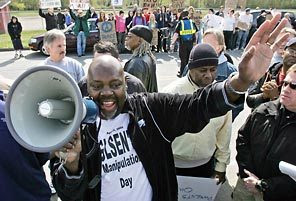 Infamous Seattle-area anti-gay activist Rev. Ken Hutcherson led a walk-out of his daughter’s high school in protest of their Day Of Silence on Friday, with over one-third of the school taking part.

A Day of Silence inside Mount Si High School meant to show support for gay and lesbian students erupted in noisy protests outside. More than one-third of students didn’t show up for classes Friday. Principal Randy Taylor said 495 out of 1,410 students weren’t at school, including 85 athletes whose parents had asked that they be excused for their personal beliefs.

About 100 people joined the Rev. Ken Hutcherson, a prominent anti-gay-rights activist, in prayer and song that questioned the dedication of a school day to what they said was a controversial political cause.

Snoqualmie police placed yellow crime-scene tape between Hutcherson’s supporters and about 40 counterdemonstrators, including some former students, who tried to drown out the pastor by beating drums and chanting, “Go home.”

Earlier, about 80 parents and supporters of the event, sponsored by the school’s Gay Straight Alliance (GSA), stood quietly outside the school as students arrived in the morning. Some wore tie-dye scarves, and a former student waved a rainbow flag. “We want to let students in the GSA know they have support in the community,” said Lucinda Hauser, a Mount Si parent and member of the local Methodist church.

Members of the group of supporters said they did not want to confront Hutcherson or his supporters and left about 8 a.m. The national Day of Silence was observed Friday by more than 200 high schools around the state and more than 7,000 school and colleges nationally. It has been observed nationally for the past 13 years.

Participants take a vow of silence to represent the silence many gay and lesbian students feel they must maintain at school to avoid harassment. Some conservative Christian groups, including Concerned Women for America, had called for a national boycott and urged followers to keep their children home from school.

The Mount Si event became a flash point for controversy after Hutcherson, whose daughter attends the school, was invited to give the Martin Luther King Jr. Day speech earlier this year about his experiences growing up black in Alabama. Because of his controversial views on homosexuality, one teacher booed his appearance and another questioned his support for equal rights.

Hutcherson, pastor of Antioch Bible Church in Redmond, last week called for 1,000 “prayer warriors” to join him outside the school Friday. He and his wife also took out a half-page ad in the Snoqualmie Valley Record calling on residents to join them.

Speaking to his followers Friday, Hutcherson said, “We want education, not indoctrination.” He said school officials had not listened to parent complaints that the Day of Silence interrupted learning and was more appropriately held before or after school.

Last year Hutcherson asked for evangelicals nationwide to buy stock in Microsoft in order force a “shareholders revolution” and force the company to recant its support for LGBT rights in Washington state.