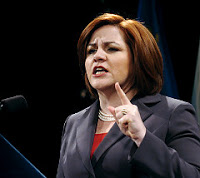 City Council Speaker Christine Quinn burned up the phone lines over the weekend, trying to calm an uprising by rank-and-file Council members infuriated by the financial scandal on her watch.

Her fellow lawmakers were caught by surprise when Quinn’s secret slush fund was exposed, then were blindsided again Friday when she said she would reform the system by limiting their discretionary funds as well. That prompted a series of extraordinary meetings by delegations from Queens, Brooklyn and the Bronx, Council sources said.

“We’re upset,” Councilman Erik Martin Dilan said at Brooklyn Borough Hall last night, after the Brooklyn delegation emerged from a 2-1/2-hour meeting. “The Council wasn’t briefed about the investigation, and now the speaker is proposing changes,” Dilan said. “We acknowledge we need change, but don’t want to cede the power of the City Council.”

Councilman Kendall Stewart, who was subpoenaed in connection with the probe last fall but said he is not a target, added, “The changes that the speaker is talking about cannot be allowed to happen. A lot of our smaller groups would be left out.”

Brooklyn Councilman Charles Barron has called for Quinn to step down, and although other members tossed around the word coup yesterday, they said there were no plots to oust her from her post.

Even if Quinn survives this scandal, her hopes to succeed Bloomberg as mayor next year have been seriously damaged.