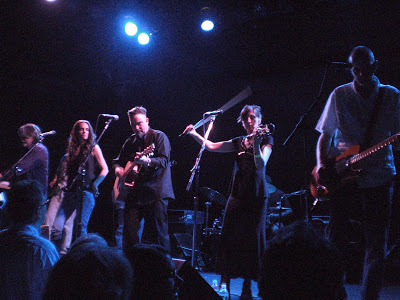 Last night the Farmboyz and I attended the Poi Dog Pondering concert at the Bowery Ballroom, the first time seen them since I had pretty much ignored them on some multi-act bill back in Florida a dozen or more years ago. Poi Dog’s style is impossible to pigeonhole – they’re a bizarre melange of blues, disco, house, and Hawaiian, with not a little Irish folk thrown in.

Last night’s 23-song set included much of their early hits like Complicated, but also leaned heavily on their just-released seventh studio album, 7. The highlight of the show for me was their cover of Ten City’s That’s The Way Love Is, one of my favorite early house tracks. Poi Dog’s current eight-piece ensemble has one of the highest levels of musicianship you’ll likely experience live; I recommended catching them on the rest of this tour, which hits Philly, Baltimore, and Boston over the next three nights.

After the show, we headed for Habibi, the gay Arab party which has moved around Manhattan for the last couple of years. We’ve always wanted to attend Habibi, so when we heard that this month’s event would be at the Eagle, of all places, we couldn’t resist. We walked into the lower level to see that they were finally using their recently-acquired cabaret license. The pool table was removed for dancing and with Arab techno blasting and Bollywood videos on the big screen – the place was jumping and packed.

In fact, I had to tell Father Tony that I hadn’t seen so much fun being had at the Eagle in a long time. At one point, a gorgeous female belly-dancer displaced the shirtless Arab hotties on the go-go platform and performed with a tray of lit candles balanced on her head as hooting men threw dollar bills at her feet. DJ I.Z.’s music was fantastic and I was reminded of my brief obsession with bhangra-techno back in the early 90’s. Some Jordanian guy told me that I.Z. was playing songs in Arabic, Turkish, and Hindi, but the crowd seemed to react to each of them equally well and the dancers near us sang along to almost everything.

Habibi is Arabic for “my beloved male friend” and as the night wore on, there was a lot of belovin’ goin’ on. Since so many of last night’s songs seemed to have the word “habibi” in them, Father Tony speculated that the word might be an Arabic music version of “corazon”, the word that appears in most Spanish pop songs. Here’s a video played last night, German pop duo Milk & Honey’s Habibi (Je T’aime.)