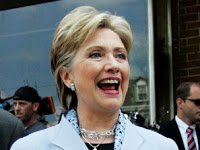 As expected, Hillary Clinton won Pennsylvania’s primary. At the time of this post her margin is 8%, not exactly enough to shout down those calling for her withdrawal from the race, but not bad considering how Obama outspent her, with his campaign shelling out over $11M to Clinton’s $4.8M. In Philadelphia, Obama trounced Clinton by nearly a 2-1 margin, but Clinton’s heavy support in the western part of the state pulled her through.