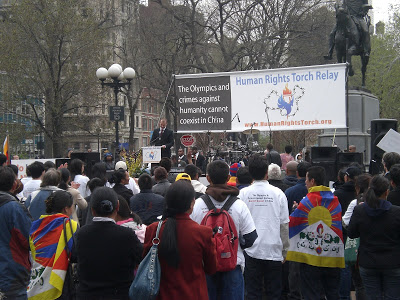 Yesterday afternoon, after a nice brunch down in the Bowery with Little David and visiting Chicago blogger Jake and his humpy fiancé, we wandered up to Union Square and ran into an anti-Olympics protest. I walked around to take pictures of the protesters with their signs, but aside from the woman below (I think she’s a nun), most didn’t want to be photographed by me and held their posters in front of their face. I’ve run into that before at various anti-war protests. I guess they see a middle-aged white guy with a military-ish haircut taking pictures and think “Homeland Security!” or whatever. There’s more a than a little paranoia at some of these things, but probably deservedly so. And I suppose if I were a Chinese national protesting human rights abuses at home, I might be wary of being photographed too. I also noticed that the wretched Falun Gong had infiltrated the event, swapping the anti-Olympics signs for gory photos of Falun Gong followers who are allegedly suffering live organ harvesting for China’s sick elite.