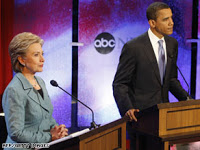 Obama: No More Debates With Hillary After his widely-panned performance in Wednesday’s debate in Philadelphia, Barack Obama has decided that 21 debates with Hillary Clinton is enough.

At an appearance in Raleigh, North Carolina, Obama said he has a lot of campaigning to do in a limited amount of time. Obama said he had agreed to an earlier debate, but Clinton declined that one. “I’ll be honest with you, we’ve now had 21,” he said. “It’s not as if we don’t know how to do these things. I could deliver Sen. Clinton’s lines; she could, I’m sure, deliver mine.”

Can’t say I blame him. Even the Obamatons were taken aback by Wednesday’s debate performance.

Previous Broadway Friday
Next Isaiah 45:7 – I (The Lord) Create Evil