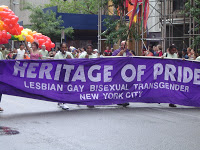 After last year’s contentious permit dispute with the city resulted in the cancellation of PRIDEfest (the post-parade street fair), Heritage Of Pride has secured the city’s approval for a new location of the event.

The 15th Annual PRIDEfest will take place Sunday, June 29, on Hudson Street between Abingdon Square and West 14th Street. Last year, HOP requested to move the event a day earlier and to Eighth Avenue in Chelsea because the old space on Washington Street was too crowded and less accessible; HOP also claimed that holding the event the same time as the March limited the number of people who could attend both.

But the mayor’s office made it clear that Chelsea was not an option, so HOP did some scouting around. Many of their choices were off-limits: major construction was under way at Washington Square Park, and none of the avenues were available because Fifth Avenue was already closed due to the March. David Schneider, co-chair of HOP, said that their options narrowed down to two: the former Washington Street space or Hudson Street. “We chose the new space for its width and its better upkeep,” he said.