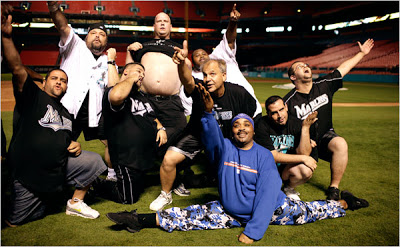 Bears and chubby chasers have a new reason to watch baseball. The Manatees are the Florida Marlins’ new 16-man “plus size” cheerleading troupe.

FIFTEEN men auditioned. Fifteen made the cut. Few could tell an eight-count from a pivot turn, but no matter: Ladies and gentlemen, make some noise for the Manatees, Major League Baseball’s first all-male, plus-size dance troupe.

When the Florida Marlins play the New York Mets at Dolphin Stadium in Miami on Monday, they will embark on a new season laden with all of the comfortingly familiar characters and rituals. But on this opening day, and at every Friday night home game that follows, the Manatees will strut their stuff in front of a larger audience than most dancers dream about.

“Every now and then you’ve got to score one for the big guys,” said Angel Villarreal, who initially dismissed the Manatees as “a goof” when he received an e-mail message soliciting supersize Marlins fans. “I felt like that ‘Saturday Night Live’ skit when Chris Farley is trying out for the Chippendales.”

Hollywood is already interested in doing a movie about the Manatees. By the way, I love that the New York Times posted this in their “Dance” section.

Previous Hanes’ “Lipstick” Campaign
Next At The Log Cabin Convention