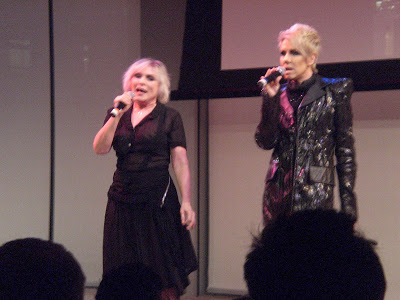 BELOW: The evening kicked off with a two-song performance by Debbie Harry and Miss Guy. The second number was a great cover of Ace Frehley’s New York Groove. I’ll have a video clip of the performance up later today. BELOW: After accepting his award from Debbie Harry, who spoke about her role in Hairspray, John Waters launched into what has easily got to be one of the most raunchy speeches ever given at the podium of a gay rights event, touching on glory holes, back rooms, muff diving, and shrimping. It was classic John Waters. Waters also amusingly spoke about (paraphrasing here) reverse assimilation, saying instead of blending in with straights, we should work to make them gayer. BELOW: I ran into activist Brendan Fay and filmmaker Gréta Olafsdóttir, director of The Brandon Teena Story, who were there to film Gov. Paterson. I was so happy to be able to personally congratulate Brendan on he and his partner’s recent public relations triumph over the president of Poland. BELOW: When the Task Force invited David Paterson to the awards, he was still Lt. Governor, so with the budget deadline looming in Albany, the governor was unable to attend. Accepting for Paterson was his openly gay First Deputy Secretary Sean Patrick Maloney, who you may recall ran for Attorney General of New York in 2006. Maloney introduced a hilarious video message from Paterson, which opened with: “Help! If you are seeing this video, please call the FBI or Interpol as I’m strapped to this chair with a gun to my head until we finish the budget!” If David Paterson wasn’t a politician, he’d have a career in stand-up. BELOW: Downtown scenesters Kenny Kenny and Patrick McDonald added flash to the room of power suits. BELOW: Matt Foreman and myself. While Matt leaves an enormous legacy of LGBT activism in New York, he will undoubtedly continue his trailblazing work at the Haas Fund, where he will oversee the largest grant program for LGBT rights outside of gay organizations. From the podium, Matt recognized his partner of 18 years, Frank De Leon, and spoke tearfully and eloquently about the battles both won and lost during his time at the helm at the Task Force. Speaking to critics who complain of “mission creep” in LGBT orgs, Foreman avowed that abortion rights are a gay issue and that racism is a gay issue and he pledged that after his departure the Task Force will continue to work with a broad coalition of progressive groups towards fairness and equality. In all, it was an inspiring evening, just being in the presence of so many people who have devoted their lives to LGBT equality. Aaron and I left feeling newly energized for the fight. On a personal note, while Matt Foreman’s departure surely leaves a (temporary) void in an organization that has fought loudly and fiercely for all our LGBT brothers and sisters, I’m confident that his star will only continue to rise. I’m proud to call Matt Foreman my friend.

Previous “Lost Glory” Returning To SoMa?
Next Death By Blogging