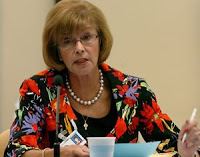 NC School Board To Excuse Haters Oh, brother. Remember how the Jeesbus-folk are up in arms and plan to keep their kids home on the coming Day Of Silence in public schools? The Day Of Silence is organized by the Gay, Lesbian and Straight Education Network (GSLEN) and is meant to bring attention to bullying and violence against LGBT students.

Well, now a member of the Charlotte, North Carolina school board wants to give an “excused absence” to students that refuse at attend that day.

School board member Kaye McGarry says she’ll ask her colleagues to approve excused absences for Charlotte-Mecklenburg students who stay home on the April 25 “National Day of Silence,” held to protest harassment of homosexuals. McGarry said she’s been getting calls all year from parents who don’t want their children exposed to the event. That accelerated during last month’s high-profile debate over a Charlotte-Mecklenburg Schools anti-bullying policy.Students told the school board that participants in previous silence days have been shoved and called names. The board approved the anti-bullying policy over the protest of some board and community members who said it could lead to schools promoting homosexuality and squelching the views of some Christians who believe it’s a sin. Afterward, an e-mail from the American Family Association circulated, urging parents to keep their kids home if their school participates.”By remaining silent, the intent of the pro-homosexual students is to disrupt the classes while promoting the homosexual lifestyle,” says the e-mail, which provides a link listing five Charlotte-Mecklenburg high schools and one in Cabarrus County as participants.

An authorized Day Of Hate, courtesy of the state of my birth. I renounce my Tarheel-ness. (Unless, the school board doesn’t listen to McGarry.) The Day Of Silence is April 28th.