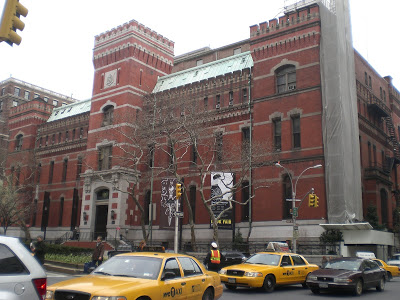 The Park Avenue Armory (also known as the Seventh Regiment Armory) straddles an entire block on the Upper East Side from Park Avenue to Lexington between 66th and 67th streets. The Gothic Revival building was designed by Charles Clinton and was completed in 1881 with entirely private funding, the only such armory in America. The massive 55,000-square foot Drill Hall is one of the largest unobstructed interior spaces in New York City. Unfortunately, the core structure is in serious disrepair and in 2000 the Armory was named one of the 100 most endangered sites in the world by the World Monument Fund, the only venue in NYC to make the list. Even though the building is a National Landmark and is under restoration, repairs will be slow and very expensive due to lead and asbestos contamination.

The Armory currently houses a regiment of the National Guard, but is primarily rented out for specialty retail shows and social functions, such as the massive circuit party I attended there in 1994 as part of the Stonewall 25 celebration. I can’t remember the name of the party, the DJ, who I went with, or if I had a good time, but I do remember being blown away by the ornate woodwork of the entrance rooms and the stained glass windows. In fact, the NYC Landmarks Commission calls the interiors of the Armory “the single most important collection of 19th-century interiors to survive intact in one building.” You can’t really wander around inside the Armory these days, but if you’re passing by, definitely stop and gawk at the lobby.

Previous Daily Grumble
Next Wingnuts: No Fun For Kids, Ever!