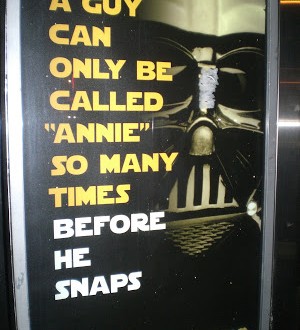 I found this Star Wars ad on a phone booth in Chelsea. I suppose some could view it as anti-gay in the “getting called a girl’s name will make you a killer” sort of way, but I have to wonder if the ad wasn’t deliberately placed in the gayborhood as an in-joke amongst queers. I suspect the latter.

Previous Fun With Shoppers
Next Maine In Fight Against Rights Rollback