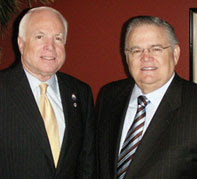 Will the same people that leapt on Rev. Wright denounce this asshat?

On his radio show yesterday, right-wing talker Dennis Prager asked Hagee to respond to “the various charges made against him” in a fact sheet put out by the Democratic National Committee. Asked about his comments on Hurricane Katrina, Hagee said “the topic of that day was cursing and blessing”:

HAGEE: Yes. The topic of that day was cursing and blessing. … What happened in New Orleans looked like the curse of God, in time if New Orleans recovers and becomes the pristine city it can become it may in time be called a blessing. But at this time it’s called a curse.

Prager followed up by asking if all natural disasters are a result of “the divine hand” and if there is “any natural disaster that is not the result of sin?” Hagee responded by saying “it’s a result of God’s permissible will” and “that there was going to be a massive homosexual rally there the following Monday,” which he said “was sin”:

PRAGER: Right, but in the case, did NPR get, is this quote correct though that in the case of New Orleans you do feel it was sin?

PRAGER: No, I understand.

HAGEE: It was scheduled that Monday.

PRAGER: No, I’m only trying to understand that in the case of New Orleans, you do feel that God’s hand was in it because of a sinful city?

HAGEE: That it was a city that was planning a sinful conduct, yes.

Unconvinced by Hagee’s explanation, Prager said “frankly” that critics “can get you” for those comments “because people don’t like to hear that sort of thing.”

You may recall that in February McCain said he was “very honored” to have received Hagee’s endorsement, for which McCain had lobbied hard. Since then he has both repudiated some of Hagee’s positions and defended others, saying most recently (on Sunday) that he was “glad to have” Hagee’s support. McCain has been silent on Hagee’s “gays caused Katrina” idiocy.

And since when is Southern Decadence a “rally”?