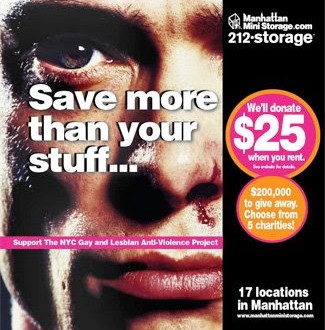 Manhattan Mini Storage:
Still Made Of Teh Awesome I’ve blogged several times about Manhattan Mini Storage’s provocative ad campaigns, which tend to support progressive causes ranging from pro-choice to anti-Bush. Now, in an in-yer-face dig at conservative groups (such as the Catholic League who want Gothamites to boycott the company), they have unveiled a new “Save More Than Your Stuff” program in which they donate $25 (in the name of new customers) to one of five charities: Planned Parenthood, The Coalition To Ban Horse-Drawn Carriages, Animal Haven, Citymeals-On-Wheels, and the NYC Gay & Lesbian Anti-Violence Project. This is how you win business, in my world at least.