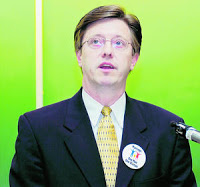 Maine In Fight Against Rights Rollback Proposed: “Do you want to protect traditional marriage and eliminate special rights in Maine?”

Summary: The initiative would limit marriage to one man and one woman. It would forbid the establishment of civil unions and change adoption law so that only one person, or a married couple, may adopt. The measure would remove the designation “sexual orientation” from the Maine Human Rights Act and eliminate state funding for the Attorney General’s civil rights teams.

Maine did not achieve protections for gay people until March 2005, after which the wingnuts immediately forced a veto referendum in which the new law was upheld by a slim 55% majority.