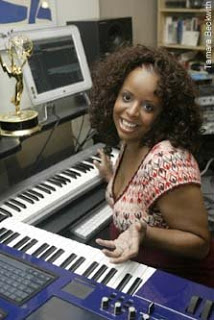 I’ve updated my Black Party 2008 review to add that promoters have informed me that the unannounced 7:30am performer was Katreese Barnes, the musical director of Saturday Night Live, who sang her new single Alright, Alright to general acclaim from party attendees. And that’s a tough crowd right there, people.

Barnes is the co-writer of SNL’s smash viral video Dick In A Box, for which she shared a songwriting Emmy with Justin Timberlake and Andy Samberg. Barnes’ songs have been recorded by Diana Ross, Roberta Flack, Chaka Khan, Luther Vandross and many others. Alright, Alright was produced by Black Party headliner DJ Jonathan Peters and is available for streaming and download on Masterbeat.com, where it is currently #1 on their chart, thanks, no doubt, to Black Party attendees more in the musical know that I am.

A murky clip of Barnes’ performance has already surfaced on YouTube, but like the dozen or so other clips from this year’s Black Party, it’s almost unwatchable. As distracted as I was by friends at the moment, I wasn’t digging Alright, Alright so much at the party, but after a few listens on Masterbeat, I had to download it. There’s always one tune that I hear for the first time at Black Party that comes to represent the event for me in years to come. This one is it.