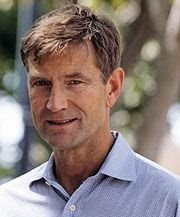 The Human Rights Campaign (HRC) REFUSES to support Jim Neal, an openly gay candidate in North Carolina running for US Senate. Something fishy seems to be going on. Is the DSCC interfering in a Democratic Primary election?

Jim Neal, a progressive Democrat in North Carolina, is running to take on Senator Elizabeth Dole. He was the only Democrat running for the nomination until the National Democratic Party found out he was gay. The DSCC freaked, and recruited a Republican-lite candidate named Kay Hagan to run for the nomination (she originally refused to run). Basically, everyone in Washington DC is freaked that there is a openly gay candidate who actually has a shot of winning the Dem nomination on May 6th.

Jim Neal is supported by many here in North Carolina. He’s a businessman/investment banker, so he has financial sense. He also is progressive on many issues. He’s an amazing speaker in person, and would really put Elizabeth Dole on her toes.

Here’s the list of Senatorial candidates endorsed by the HRC:

I can’t imagine why the HRC has not endorsed Neal.