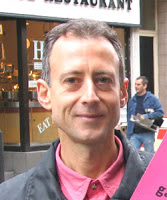 “All forms of oppression depend on two factors for their continued maintenance. First, on specific economic, political and ideological structures. Second, on a significant proportion of the population being socialised into the acceptance of harsh masculine values which involve the legitimisation of aggression and the suppression of gentleness and emotion.

“The embracing of these culturally-conditioned macho values is what makes millions of people – mostly straight men, but some women and gay men too – able to participate in repressive regimes. This interaction between social structures, ideology and individual psychology was a thesis which the communist psychologist, Wilhelm Reich, was attempting to articulate six decades ago in his book, The Mass Psychology of Fascism.

“In the case of German fascism, what Nazism did was merely awake and excite the latent brutality that is intrinsic to the forms of heterosexual masculinity that are usually characteristic of patriarchal class societies. It then systematically manipulated and organised this machismo into a fascist regime of terror and torture which culminated in the holocaust.

“Since it is the internalisation of the masculine cult of toughness and domination which makes people psychologically suited and willing to be part of oppressive relations of exploitation and subjection, repressive states invariably glorify masculine “warrior” ideals, and persecute those men – mainly queers – who fail to conform to them.

“The embrace of masculine aggression by sizable chunks of the male population is a prerequisite for injustice and tyranny. Love and tenderness between men therefore ceases to be a purely private matter or simply a question of personal lifestyle. Instead, it objectively becomes an act of sexual and cultural subversion that undermines the psychological foundations of oppression.

“Hence the Nazi vilification of gay men as “sexual subversives” and “sexual saboteurs” who, in the words of Heinrich Himmler, had to be”exterminated root and branch.” The ending of tyranny, injustice and exploitation therefore requires us to change both the social structures and the individual personality.” – Peter Tatchell, excerpted from a long speech to the European Feminist Summit in London.