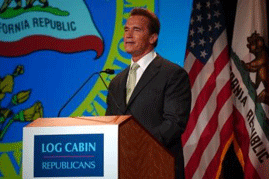 Well, this is a suh-weet way to end the week!

Speaking to the annual Log Cabin Republicans convention in San Diego, Gov. Arnold Schwarzenegger said that if the current initiative to ban gay marriage in California makes it to the November ballot, he will fight against its passage.

Gay journalist Rex Wockner quotes Schwarzenegger as saying: “Well, first of all, I think that it would never happen in California because I think that California people are much further along with that issue. And, number two, I will always be there to fight against that. I think we need a constitutional amendment so that foreign-born citizens can run for president, but not about gay marriage. That’s a total waste of time.”

The Governator’s pledge drew loud cheers from conventioneers, with LCR president Patrick Sammon saying afterwards, “The topic was planned, the answer was not. I’m excited and delighted.” The was the first time Schwarzenegger has spoken out against the ballot drive, although his spokesperson said that he has held the view for some time.

Schwarzenegger is currently the defendant in a suit brought by same-sex couples fighting the state’s current statutory ban on gay marriage. That case should be ruled upon by the California Supreme Court shortly. The governor has twice vetoed legislation legalizing same-sex marriage, saying the issue should be up to the voters or the courts.

Dare we grant even a partial credit to the Log Cabin Republicans with this development? They appear to be as surprised by this as the rest of us, but they did provide Ah-nold with the forum to “come out” against the ballot drive.

Previous Vodka Flap Gets Stupider And Stupider
Next Hopefully Faster