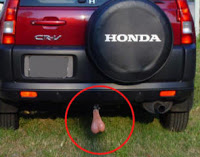 Oh, those wacky Floridians. A bill is before the state legislature to ban the “ornamental testicles” that some Sunshine State idiots are hanging from their trucks and SUVs.

Metal replicas of bull testicles have become trendy bumper ornaments in some parts of the Sunshine State, but state Sen. Carey Baker is campaigning to ban the orbs.

Baker acknowledged that Florida lawmakers have more pressing issues, including huge revenue shortfalls, but said the state needs to draw a line on what’s obscene before more objectionable adornments appear. State Sen. Steve Geller argued against Baker’s bill. “I find it shocking that we should be telling people that have the metallic bull testicles … you’re now going to have points on your license for this,” said Geller.

Geller was in the minority. Baker’s bill to fine drivers $60 for displaying the ornaments passed the Senate. It’s now up to the House, but there’s only a slim chance that members of that chamber would pass the measure before the session ends this coming Friday. If it were to be passed, Gov. Charlie Crist has not indicated whether he would sign it, although he has not been too critical of this and other not-so-pressing issues. “It’s good to have some things that maybe aren’t quite as serious. Got to have a little levity,” the governor said. A similar bill in Virginia, aimed at rubber trailer hitch replicas of male human genitalia, died in committee this year.

If you must, you can get your “bumper nuts” here. You can also get the nuts on a hinge so they swing in traffic. Ugh.