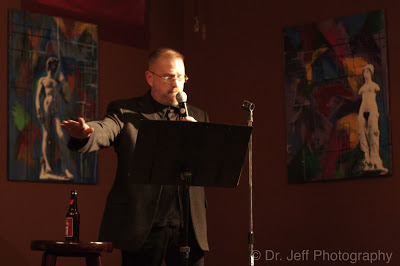 I read The Mommy Box, a story that appeared on JMG in five episodes in late 2004, but was later taken down for another project. It’s a story that is very uncharacteristic of my previous shows: tough material, grim resolution. And while it had a moment or two of comic relief, I had a hard time getting through some of it and my performance suffered for it, dammit.

However dark my piece was, the rest of the performers were a riot and I think the audience had a blast. Kudos to Joe Birdsong and his staff for a great run and here’s hoping their plans to move Reading For Filth to a larger venue come to fruition. Rapture is having some great events before their April 24th “transition” (closing), so please drop by while you still can. They’ve got some major performers lined up over the next week or so. Previous Raves For BoltBus
Next Counterproductive To Military Readiness