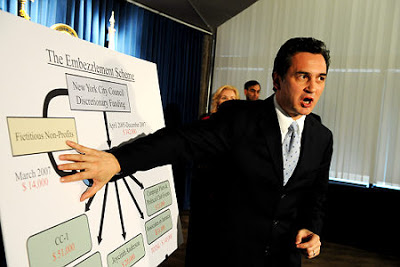 Two city council staffers were indicted by the feds yesterday for embezzlement and Speaker Christine Quinn, the most powerful openly gay politician in NYC, has hired a criminal defense attorney for herself.

The indictment Wednesday of two City Council staffers on charges of stealing $145,000 in a complex money-laundering scheme could be just the beginning, investigators warned. The legal action puts new pressure on Council Speaker Christine Quinn (D-Manhattan), who claims she tried to end the practice of creating a slush fund in which budget money was put in fake accounts. The cash was later doled out at individual Council members’ discretion. “Without transparency and accountability in the budget process, discretionary items are ripe for abuse,” Manhattan U.S. Attorney Michael Garcia said as he announced the indictments.

Via the NY Daily News:

This year $47.4 million went to Council discretionary funds, with Speaker Christine Quinn controlling $21 million and the rest split up among rank-and-file members. Other untold millions are buried in another $313 million budgeted by the Council. Quinn controls how that money is spent on supposed “new initiatives” and “restorations,” but individual members or borough delegations often get to share in passing it on to favored groups and take credit for it in their districts.

Possible abuse of discretionary funds is at the heart of the ongoing probe by DOI and the Manhattan U.S. attorney’s office, whose investigators have discovered a shocking example of alleged fiscal trickery used to hide and obfuscate. They uncovered the Council’s secret method of parking discretionary funds in fictional nonprofits to distribute later. That practice, they say, dates back at least to 2003, implicating Quinn and her predecessor, Gifford Miller.

Quinn has hired Lee S. Richards III, a criminal attorney who is a former federal prosecutor, to represent her. Richards will be paid with city funds.