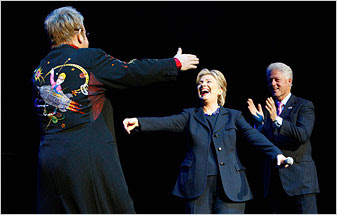 “I’ve always been a Hillary supporter,” John, 61, said before launching into his 1970 breakthrough hits, “Your Song” and “Border Song.” “There is no one more qualified to lead America.” The English singer, composer and pianist added: “I’m amazed by the misogynistic attitudes of some of the people in this country. And I say to hell with them …. I love you Hillary, I’ll be there for you.”The cheapest tickets, $125 and $250, sold out quickly, campaign aides said. The other seats were filled by fans paying as much as $2,300, the limit for an individual’s contribution to a federal candidate. Preceding John on stage were Clinton, her husband, former President Clinton, and their daughter, Chelsea. Hillary Clinton struck a defiant, underdog note in describing her battle against Sen. Barack Obama of Illinois.”What I want you to know is I’m still standing [JMG: groan], and I believe this country is worth fighting for,” the New York senator said, playing off the title of one of John’s hits. “So we’re taking our campaign to Pennsylvania and all the states that haven’t voted.” Pennsylvania votes April 22.

You have to wonder if Elton played his 1974 smash, The Bitch Is Back. Bet he didn’t.

Previous Back In The New York Groove
Next Open Thread Thursday