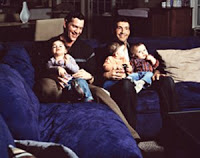 Details Magazine blogs about the gayby boom. Interesting story overall, but with a few “Oh, brother” moments, one of which I’ve bolded below.

Evidence of the gayby boom is everywhere. It isn’t just the strollers in gay neighborhoods. Some Halloween parties at lesbian, gay, bisexual, and transgender community centers now brim with gay dads showing off their immaculately costumed progeny. And participants in New York City’s Gay Pride Parade have turned down the volume of the music in order to be more accommodating to kids.

“They’re even talking about having a family week on Fire Island this summer,” says Ron Poole-Dayan, a marketing consultant who runs a biological-parent support group in Manhattan and has 7-year-old twins with his partner, Gregory Poole-Dayan. “So that tells you something.”

Ten years ago, if you were a gay couple who wanted a baby through in vitro fertilization you were likely to go to Southern California, which embraced IVF early on and has many specialist agencies. Today these clinics are pretty much all over the country.

And it’s not just gay couples who are investigating IVF. Many homosexual men have decided to go it alone, which provides at least one tangible bonus: While single parenthood can be a turnoff on the heterosexual dating scene, being a single gay dad is—there’s really no other word for it—hot.

“In the gay community, having a child as a single man is a sign of assertiveness,” Ron Poole-Dayan says. “It’s also appealing to know this is a gay man who isn’t afraid of commitment.” Poole-Dayan says he’s seen six out of the seven single gay dads he knows pair off after the births of their children.

That’s what happened to B.J. Holt, 40, a general manager for Broadway stage productions. “I worried about being a single father,” Holt says. “But sure enough, as soon as I started the process with a surrogate mother, I met my future partner.” Today Holt and his partner, who asked that his name be withheld, are raising Christina, who is 7 months old.

Darek DeFreece, 36, an investment-banking attorney who lives in the Bay Area, was aware of the possible consequences of being a single father. “I worried about the workload, about having enough time to give to my family and my personal life,” he says. But those concerns seemed relatively trivial when he looked at the long term. “It was especially important for me to have children as a single man. I looked at myself in the future, and being a single, older man without kids didn’t seem like a desirable place to be.” (DeFreece no longer has to worry about being on his own—he and his partner have 9-month-old twins, Jake and Riley Catherine.)

In other words, if you really want a husband – get a baby. Next week on Maury Povich.

I’ve run into this “hot father” mindset a few other times and I’m quite certain that some of these gay men acquiring babies are merely using them as a gentler, 21st century version of past masculizing devices: muscles, tattoos, trucker wear, etc. However, I am very aware that my own utter lack of interest in parenting may cause me to project these suspicions onto those who are completely undeserving.

Of course, how this gayby boom plays into the increasing straightifying of gay culture in another issue entirely. Any gay person that wants to be a parent should pursue that dream – I just worry that some of these dreams are coming from the wrong place. Still, as a commenter here said recently, even we old-school queers have to consider that perhaps by having children, these queer parents are the true transgressives of the movement. Let’s hope that most of them are doing it for the right reasons.