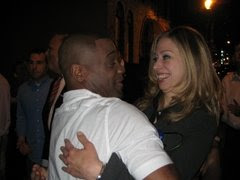 They loved her hair; they smacked her butt; they hooted and hugged Friday night as Chelsea Clinton hit Philadelphia for what campaign aides called a “gay pub crawl.”

“Chelsea, the gays love you!” Jeff Guaracino, 35, shouted as the former first daughter took the stage at Bumps, the first of four stops for Clinton, Gov. Ed Rendell and actor/producer Rob Reiner.

“Oh, gosh, I don’t know if everybody loves me,” responded Chelsea, who made her first visit to the city’s gay clubs a couple of weeks earlier and has made similar stops at gay bars in other cities while campaigning for her mother, Sen. Hillary Rodham Clinton.

The reception was no less enthusiastic at the second stop, Sisters, a lesbian bar, where women dancing to Kool and the Gang’s “Celebration” barely allowed Chelsea to speak because they kept interrupting her.

Led around the neighborhood by Gov. Ed Rendell, Chelsea was mobbed by local gays and lesbians, as she walked from one club to the next. They ran up to hug her, posed for pictures and certainly invaded her personal space. “I grabbed her ass,” one young woman exclaimed to her friends after snapping a picture with her arm around the former first daughter.

Of course, the butt-grab delighted the Freepers.