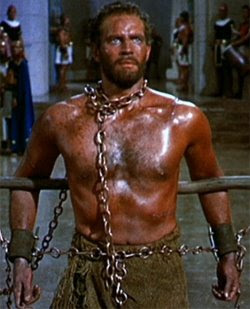 By now you’ve surely heard that Charleton Heston died this weekend at age 83. Probably like most of you, I was a huge fan of Heston’s acting work (particularly Planet Of The Apes and Omega Man), but loathed some of the man’s politics. Heston marched on DC with MLK in 1963, but was occasionally less charitable towards gays.

Here’s a choice quote from a 1997 speech in which Heston pledges tolerance for gays one minute, then goes off the rails the next: “I find my blood pressure rising when Clinton’s cultural shock troops participate in homosexual-rights fund-raisers but boycott gun-rights fund-raisers, and then claim it’s time to place homosexual men in tents with Boy Scouts, and suggest that sperm donor babies born into lesbian relationships are somehow better served and more loved.”

By the way, all the “gun finally wrestled from Heston’s cold dead hands” jokes have already been made.

Previous An Oopsie For Out Magazine
Next HomoQuotable – Andrew Sullivan