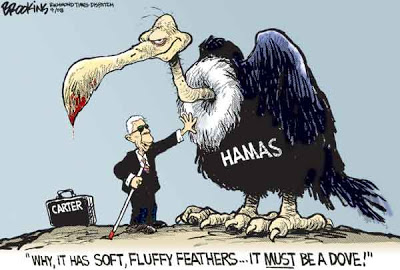 Despite earning the wrath of the left and the right for meeting with Hamas, Jimmy Carter seems to have made some progress where others could not.

Jimmy Carter says Hamas leader Khaled Meshaal, and other senior members of the Islamic militant group he met with in Damascus have told him they are willing to accept a peace agreement negotiated by the moderate Palestinian leader Mahmoud Abbas – if the agreement is approved by Palestinians in a referendum.

Carter says that Hamas rejected his plea for a unilateral ceasefire in the Gaza Strip.