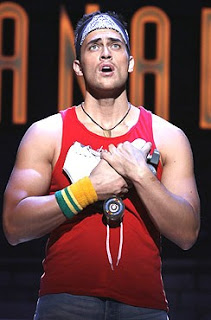 – On April 28th, Xanadu star Cheyenne Jackson will host Live Out Loud’s 7th Annual Gala, a benefit dedicated to empowering LGBT youth. Hundreds of community leaders will be on hand as scholarships are awarded to four high school seniors who have “demonstrated outstanding leadership skills.” Tickets start at $85.

– Danny Elfman (my favorite movie scorer) will write the music for a Broadway musical about Harry Houdini, which is set to open in 2010. Lyrics by David Yazbek, book by Spy Magazine founder (and former editor of New York) Kurt Anderson. Tony winner Jack O’Brien (The Coast Of Utopia, Hairspray) will direct.

– Broadway’s hits continue to flop in Las Vegas, with Spamalot to be replaced in July with impressionist Danny Gans. Recent closures in Vegas include Hairspray and Avenue Q. A language barrier for foreign visitors and the “short attention span of gamblers” is being blamed. Meanwhile, Cirque du Soleil is set to open their sixth permanent show on the Strip. – The same company that handed a talk show to Ricki Lake a few years after the first Hairspray movie is now giving one to Marissa Jaret Winokur, who won a Tony for her Broadway version of Tracy Turnblad. Winokur’s show launches nationwide next fall. I loved her in American Beauty. “You are so busted.”

– More Cheyenne Jackson. About to beginning shooting is Shifting The Canvas, a movie starring Jackson as a just-out gay Wall Streeter. The flick “tells the story about a group of artists living in Williamsburg, Brooklyn who struggle to maintain a rather dysfunctional family of friends in a post-9/11 world challenged by gentrification, deception, and sterilization.” Also cast: Kids In The Hall alum Scott Thompson and Long Duc Dong Gedde Watanabe. “Sexy girrrrlfriend!”

Previous Hanes Apologizes
Next Obama: No More Debates With Hillary