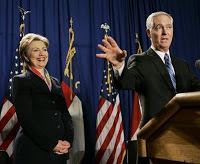 Clinton began using Rocky-inspired metaphors during her primary campaigning in Pennsylvania. Philadelphia was the setting for the Best Picture-winning 1976 movie.

Despite an outcry from many bloggers, thus far most gay rights groups have remained silent on the incident, even though the word “pansy” is considered by many to be a pejorative code word for homosexual. Only GLAAD has issued a mild protest.

“GLAAD is concerned with Gov. Easley’s flippant comment this morning utilizing the word “pansy,‘” said GLAAD President Neil G. Giuliano. “The word is considered by many to be a demeaning and degrading reference to gay men. We encourage all those engaging in political rhetoric to stay away from using language that is considered defamatory toward any group of Americans.”

But bloggers, many of them Obama supporters, have come out swinging:

So why didn’t our outgoing governor just go ahead and say “faggot”? Note that Hillary, who was right there with the NC gov, said nothing about his remark. Of course Easley infamously received the endorsement of Equality NC in his re-election bid, then in a debate said he’d sign a marriage amendment if it hit his desk, so why should we be surprised. And who is Hillary trying to court here — the “traditional Southern conservative.” Take the homo money and run, as it were.

It’s ironic. Hillary is afraid to use the word “gay,” and gets visibly uncomfortable when answering questions about gay issues. But using slurs for “fag”” doesn’t bother her in the least. Hillary and her people will say anything to get elected. And if that means gay-bashing to win the bubba vote, then so be it. And her people wonder why so many have turned on Hillary in the past few months.

Now, I know from spending many recesses in middle school being called a pansy that it’s just a subtle way of saying “faggot.” Clinton stood by while Easley made that comment, smiling away. Speaking to a prominent gay journalist friend of mine this morning, he expressed his frustration with her campaign. “Hillary doesn’t care about the gays. It’s that simple. We’re a political tool, like everything else in that family’s orbit.” Clinton owes the gay community, which she has shamefully used as an ATM during her campaign, an apology for gay-baiting. We’re waiting, Hillary.

Andrew Sullivan on The Daily Dish:

She’s on O’Reilly and her surrogate is accusing her opponent of being a “pansy”. Classy – but vintage Clinton. Never miss an opportunity to exploit homophobia. Remember DOMA? Remember doubling the discharges from the military? Remember inaction on AIDS? Remember the Clintons’ using anti-gay marriage ads in the South in 1996? And yet the gays keep coming back for more. I don’t understand why. I really don’t.

Former HRC staffer and Netroots activist Phil Attey emailed me with this scorcher:

The statement was calculated and hateful. Americans over the age of 50 are fully aware that the word “pansy” is that generation’s polite way of publicly saying the word “faggot.” Both Governor Easley and Senator Clinton are of that generation, and both of them know what he meant by the word. This was not a slip of the tongue. This is part of Senator Clinton’s new “Rocky theme” … a theme that sadly includes now gay bashing. On behalf of the LGBT community, I demand the following three things:

Mixed reactions in the comments of the NY Times’s political blog, The Caucus:

– “He was referring to gay male. There is no doubt about it because NC is in the so-called “Bible belt” where gay bashing is common. He was attempting to send a signal to the conservatives by indirectly indicating that Senator Clinton is anti gay just like them. This was clever use of the word.”

– “Please. I’m a gay man and I use “pansy” this way myself. I don’t think I’ve ever said it and thought about it meaning someone was gay.Now, if the Gov had said it makes Rocky look “gay” then it would rightly be seen as a shameful anti-gay slur. But pansy? Come on, people.”

– “I would define PANSY as someone who claimed to be ducking SNIPER FIRE but in reality was not.”

When I read the quote early in the day, I dismissed it and didn’t even include it in my post about Easley’s endorsement, as it came past where I’d decided to clip the story. Obviously, many feel much stronger about the word than I do. I think I’d prefer that we reserve charges of “hate speech” for more deserving examples, but it will be very interesting to see how Hillary reacts to this, if at all. At the end of the day, however, like the Rev. Wright flap, this is yet another annoying distraction from the real issues facing this country. I am completely sick of thinking about all of them.