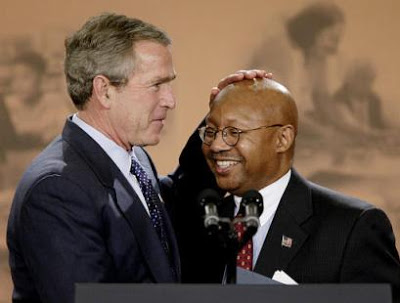 Another Bush Crony Resigns In Disgrace Alphonso Jackson, Bush’s secretary of Housing and Urban Development has resigned amid allegations he funneled housing contracts to Republican insiders.

HUD Secretary Alphonso Jackson, his tenure tarnished by allegations of political favoritism and a criminal investigation, announced his resignation amid the wreckage of the national housing crisis. He leaves behind a trail of unanswered questions about whether he tilted the Department of Housing and Urban Development toward Republican contractors and cronies.

The move comes at a shaky time for the economy, with soaring mortgage foreclosures imperiling the nation’s credit markets. In announcing that his last day at HUD will be April 18, Jackson said only, “There comes a time when one must attend more diligently to personal and family matters.”

Last year Jackson famously blamed gays in part for the mortgage crisis, saying the meltdown was caused by “yuppies, buppies and guppies” who bought $400,000 homes with little or no money down. “Guppies” means gay upwardly-mobile professionals.