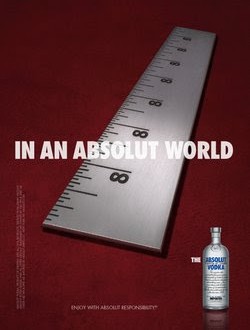 Absolut is already back in hot water with the wingnuts, thanks to this new campaign which winks at cock size.

Here’s what the Absolut rep says about this new “Ruler” campaign: “As a long-time supporter of the gay and lesbian community, we acknowledge that you can’t simply speak to gay men and lesbians as consumers, but instead need to make real connections to their lives which
we believe we are achieving with our new creative executions. As a company, we respect gay men and lesbians not simply in advertising messages, but behind the scenes as well. We’re not gay-washing here.”

And here’s what the Freepers are already saying:

– “These fools are determined to make sure that I won’t buy any of their products. First the Mexican map now supporting queers. You’d think they were in competition with McDonalds.”

– “Perhaps they are exploring a new niche market for their product – promoting it as a disinfectant after having gay sex….”

– “To me, these ads are more or less as offensive to me as if Absolut ran ads advocating child sexual abuse or extoling the vitrues of the Third Reich. WHAT ON EARTH HAS HAPPENED TO MY CULTURE?”

Say it with me, children: Oh, fucking brother.