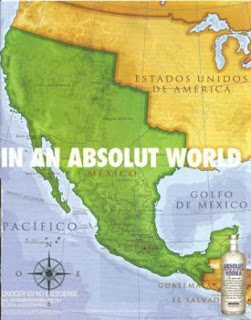 Our nation of wingnuts is severely pantie-twisted over the latest ad from vodka giant Absolut, which is now running in the Mexican press. The ad shows a map of the United States before Mexico “ceded” most of the western half of the country to us at the end of the Mexican-American war in 1848.

The ad was created by a Mexico City-based ad agency and according to Absolut was “was based upon historical perspectives and was created with a Mexican sensibility.” Certifiable nutcase Michelle Malkin bleats, “The company [Absolut] advocates overturning borders that get in the way of imagining new maps of North America that help Mexico create a larger share of the continent.” Uh, what?

Terrified by the growing boycott movement (seriously), Absolut has quickly offered a “genuine and sincere apology” for the ad. But it might be too late as already some bars around the country as removing Absolut from their shelves. They do this because of an ad that ran in a foreign country that accurately depicts our borders over 150 years ago. Oh, and so they can express anti-immigrant/anti-Mexican bigotry.

RELATED: I still fondly recall the banners carried by Mexican activists at California’s sesquicentennial celebration in Sacramento in 2000: “We didn’t cross the border, the border crossed US.” Texas, for example, has been part the United States for 163 years, but for the previous 300+, it belonged to Mexico/New Spain, not to mention their brief period as a sovereign nation. I guess Absolut better not use any old maps of Texas, either.