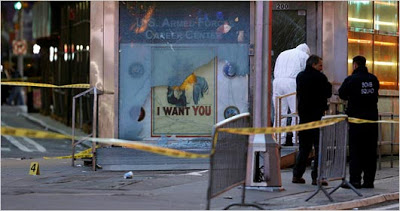 From the NY Times:

New York City police officers and firefighters cordoned off much of Times Square for more than two hours after a small explosion — apparently set off by a manmade device — damaged the front of the Armed Forces Career Center on the traffic island bounded by 43rd and 44th Streets, Seventh Avenue and Broadway around 4 a.m., officials said. No one was injured, and after a temporary interruption, subway service was restored.

You know, it’s more than a little remarkable that stuff like this doesn’t happen more regularly. I always wonder what gets thwarted that we all just never hear about.