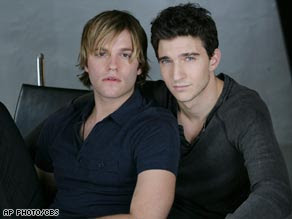 A letter writing protest campaign is underway by viewers of As The World Turns who are angry that the young gay couple on the show have not shared a kiss since their groundbreaking lip-lock on the show over six months ago.

Fans of the fictional romance between Luke Snyder and Noah Mayer are baffled about why the two characters haven’t kissed on-screen since September, wondering whether it’s a sign of squeamishness by CBS or show sponsors Procter & Gamble Co. The fans have started a letter-writing campaign, posted an online petition and even have a Web site that counts the days, hours, minutes and seconds since Luke and Noah last locked lips. “We totally support this show and applaud the show for doing this story line,” said Roger Newcomb, a computer worker from New York’s northern suburbs and the man behind the campaign. “We just don’t understand why they have to be censored or treated differently.””There are some people who want to see sex between Luke and Noah,” said 34-year-old Theresa Webber, who lives north of Boston. “I’ve been watching soaps long enough to know that they’re a teenage couple, so it’s not going to happen anyway. But for them to not kiss at all, it’s a little extreme.” The soap is owned, produced and written by Procter & Gamble Productions Inc., a subsidiary of the consumer giant that makes Bounty, Crest, Pampers, Mr. Clean and Ivory soap. CBS executives consult on the series, but the creative direction is set by P&G.

Of course, Focus On The Family is calling for a boycott of Proctor & Gamble over the gay teens story line on As The World Turns and for other positive portrayals of gays on shows that P&G sponsors.