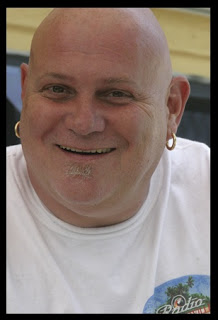 A memorial service for slain AIDS activist Michael “La La” Brown will be held this Sunday at 6:30PM at Bryant Park in Lake Worth, Florida. The park is also host that day to Palm Beach County’s Pridefest, for whom Brown was a recent Grand Marshall. Brown, 50, was a beloved bon vivant, a pillar of the South Florida gay community, and was adored by the patrons of H.G. Roosters, his gay bar where he hosted innumerable charity events over the last 20 years.

Brown was murdered in his home last week (presumably) by the man with whom he’d had a tumultuous relationship for several years. The killer stayed in Brown’s home for two days after the murder, answering Brown’s phone and walking his dogs. He then hung himself on a bedroom door. Police found both bodies when Brown’s concerned employees reported him missing.

The NAMES Project/AIDS Memorial Quilt, for whom Brown served on the South Florida board of directors, offers this remembrance:

This week The NAMES Project Foundation lost a long-time volunteer and dear friend, Michael Brown. With a generous spirit and an unwavering commitment to community, Michael was always there, ready to step in and help at a moment’s notice. He was loved by many and will be missed by all of us.

NOTE: Pridefest organizers plan to discontinue their admission charge an hour before the end of the event, in order that mourners attending the memorial not be charged to enter Bryant Park.

UPDATE: Tony Plakas of the South Florida Sun-Sentinel has written a lovely tribute to Michael Brown, his close friend. The column also ruminates on gay bar culture and how a single saloon such as Brown’s H.G.Roosters, run by the right person, can become the soul and spirit of a small town gay community.