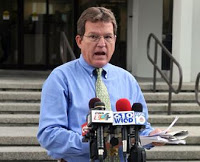 After he once again ranted about gay sex in city’s parks, this time in a column in the city’s official monthly magazine, the Fort Lauderdale City Commission has voted to delete Mayor Jim Naugle’s regular column. Instead, a group column from the entire commission will appear.

City Commissioner Cindi Hutchinson brought up the column at Tuesday’s city meeting, and her colleagues agreed that the mayor’s missives should not be carried in the taxpayer funded magazine.

Hutchinson reminded Mayor Jim Naugle of a resolution the group passed last September embracing diversity in the city. That resolution was intended as a public salve during a cultural controversy created by the mayor’s comments that public bathrooms are hookup sites for gay men, and that he uses the term “homosexual” rather than “gay” because many gays are not happy.

In his latest column in the city’s Focus on Fort Lauderdale magazine, he talked about finding a tourism Web site advertising a city park for men to meet for sex. He encouraged citizens to call if they witness illegal activities like that in public places.

“I just want all this nonsense to stop,” said Hutchinson. “I don’t want to talk about the bathroom thing again.” Hutchinson is running for Naugle’s open seat in 2009, and her campaign manager attended Tuesday’s meeting.

You have feel sorry for the city and county commissioners who have to deal with Naugle’s bullshit while trying to maintain the place as a top tourist destination. Naugle will be term-limited out of office next year, after which he has threatened to run for state office. Judging by his enthusiastic supporters found in the comments of the above-linked story, I’ll bet he succeeds.