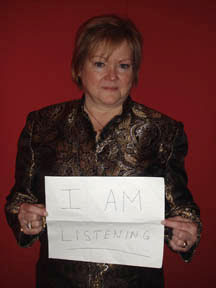 “Sally Kern’s comments hit me like a punch to the gut. I was enormously saddened that someone—anyone, really, but especially an elected official—could say such mean things about other human beings. We have so much to deal with already—the incessant dreary news about war, about the economy, about shocking crimes. I’m amazed that someone like Sally Kern found the time to push a whole new theory about who we should fear.

“But as despicable as Sally Kern’s ideas are, she is of course free to shout them from the rooftops. One of the oddest responses of people who agree with her has been that we are trying to restrict her freedom of speech. In reality, the Victory Fund gave her a megaphone. If she’s that proud of her speech, she must be thrilled that more than 1 million people have listened to it.

“No, the question isn’t whether she has a right to spew hateful rhetoric. The question is whether she ought to.” – Judy Shepard, mother of Matthew Shepard. The Victory Fund has the full text of her statement.