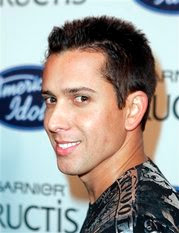 From Vote For The Worst:

And… we were right! Check out the story in the Associated Press today that confirms what we’ve been saying for a while now. David Hernandez stripped at a gay club called Dick’s Cabaret up until September of last year, meaning he was still stripping when he tried out for American Idol. We have no problem with David stripping of course, we just think he shouldn’t lie about it and pretend that he’s straight. If you’re a gay stripper, embrace it! Will this affect his time on the show? Who knows. He won’t be kicked off, but he might lose votes. And as always, remember that VFTW is the best news source that tells you these things first.