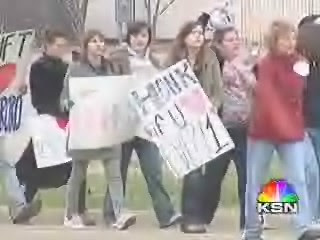 In what some had billed the “Million Fag March”, hundreds of protesters marched on the Westboro Baptist Church in Topeka yesterday.

Hundreds of people from Kansas and across the country gathered Sunday in Topeka to protest Pastor Fred Phelps and the Westboro Baptist Church. The march was also a way to promote peace, love, and equality.

People of all ages, races, and sexual orientation were present. The group of more than four hundred people marched throughout Gage Park, but were not allowed to cross any streets without a parade permit. The organizer of the march, Chris Love says he wants to show the Westboro Baptist Church there is an opposing voice equally as powerful. Other marchers feel the same.

“We don’t agree with him talking about hatred and how God hates this god hates that,” marcher Angi Boetta said. “We’re just here to show him who we are and we’re not going away no matter what you say or do.”

“All the haters and stuff they need to know that its not all about that, its about positivity and we’re trying to create a positive influence towards gay people,” marcher Joshua Burch said. The Westboro Baptist Church is known for picketing the funerals of U.S. soldiers killed in Iraq, and says their deaths are God’s way of disapproving of homosexuality in America. Topeka Police were at the march to make sure everything went smoothly. Officials say the march was very peaceful and there were no problems.

There is a video clip of the protest here.