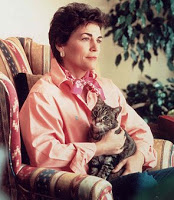 “The funny thing is, I don’t believe in straight or gay. I really don’t. I think we’re all degrees of bisexual. There may be a few people on the extreme if it’s a bell curve who really truly are gay or really truly are straight. Because nobody had ever said these things and used their real name, I suddenly became the only lesbian in America. It was hysterical. It was a misnomer, but it’s okay. It was a fight worth fighting.” – Author Rita Mae Brown to TIME.