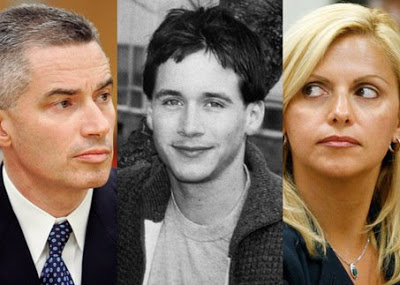 Well, this is a fascinating development.

A former aide to James E. McGreevey said today that he had three-way sexual trysts with the former governor and his wife before he took office, challenging Dina Matos McGreevey’s assertion that she was naive about her husband’s sexual exploits.

They called them “Friday Night Specials,” according to Pedersen.

Pedersen described the encounters during an interview with The Star-Ledger. He said he wanted to refute the innocent image that Matos McGreevey has projected – both during the couple’s ongoing divorce battle and in interviews she gave after New York Gov. Eliot Spitzer resigned last week in a sex scandal. He said he was also incensed by her portrayal of herself as an unsuspecting wife in her book: Silent Partner: A Memoir of My Marriage.

“I wanted to get this out now because it was so offensive to me that she goes on television playing the victim,” Pedersen said. “She’s trying to make this a payday for herself. She should have told the truth about the three of us.”

Pedersen did not say if he was gay or bisexual and only described having contact with Matos McGreevey during the trysts. He also said he never knew for sure if McGreevey was gay.

UPDATE: Dina denies it all.

“Theodore Pedersen’s claims, as reported in the Newark Star Ledger on March 16, are completely false and were prompted by Jim McGreevey. This all has to do with the publicity I have received since Governor Spitzer resigned. Jim has enlisted one of his cronies in trying to distinguish that situation from his own, and to discredit me in the media. He cannot stand it when I am receiving attention in the media rather than him.

“This is not the first time. Jim started with a false claim, made shortly before my book was published, that I knew he was gay when we were married. The falsity of that claim is made clear on the very first page of Jim’s book, just as his description of our relationship in his book stands in stark contrast to Pedersen’s false allegations.

“Jim again became the focus of the media’s attention, just one day after my book was released by announcing his intention to become an Episcopalian priest.

“Jim has had a close relationship with Pedersen since his days as Mayor of Woodbridge, and arranged jobs for Pedersen from that time through his years as Governor and beyond. They have continued their close relationship since Jim left office. Most recently, in August 2007, Jim and his partner, Mark O’Donnell, funded Pedersen’s vacation to China, along with Jim, O’Donnell, and other members of Jim’s inner circle. This was obviously payback time for Pedersen.”