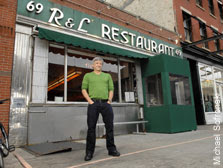 When his lease on 69 Gansevoort St. expires on March 31, rent will increase from $6,000 a month to approximately $50,000, and it’s unlikely a deal will be struck. Florent is currently battling his landlord in court over tax increases and is withholding rent as a result. The litigation also means he does not plan to simply pack up shop on the 31st.

“I talked to my lawyer and [the restaurant] will stay open for two or three months. I’d like to end on a high note and I think Gay Pride Day would be perfect.”

That’s June 29, in case you want to put it in your book. He also says he’d like to hold a writing contest – “people could write their best story, the most insane story, of the restaurant” – with the winner receiving a dinner on the final night.

And those would be some stories. Since August 1985, his round-the-clock French diner has been a place where artists, actors and average joes rub elbows over a cup of coffee or a goat cheese salad. Sprung from the gritty gay bars of the ’80s, the noir-ish diner survived among the glittery bottle-service clubs that moved in. Now regulars are dropping by to pay their condolences to Florent.

“Where am I going to go?” laments a gentleman customer. It’s become a familiar chorus, but one you won’t hear from Florent.

“I’m looking forward to the next stage in my life and at the same time I have great sadness about losing the restaurant,” he says, adding, “If you don’t get a kick in the butt, another 23 years down the road, let’s say, I would be 78 and sitting at the same table talking about, ‘When I opened the restaurant. . .’ “

I’m gonna try and get by there on Pride, I imagine it will be quite a memorable day.

Previous Hillary Issues A Trio Of Apologies
Next Dr. Death Goes To Washington