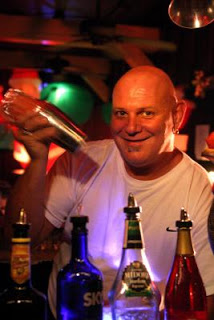 Beloved South Florida gay bar owner and AIDS activist Michael Brown, 50, was found murdered in his West Palm Beach home on Friday. Brown’s presumed killer, Brant Hines, 27, stayed in Brown’s home for two days after the murder before hanging himself on a bedroom door. Brown and Hines had had a turbulent off and on relationship for several years.

Michael Brown, owner of H.G. Roosters, a bar that has been a gathering spot for the city’s gay community for more than two decades, died of blows to the head and multiple stab wounds, an autopsy showed. Police say he was the murder victim in an apparent homicide and suicide in his Flagler Drive apartment Friday evening.

The other man found dead in the apartment, Brant Hines, 27, apparently killed Brown late Wednesday or early Thursday, when a neighbor heard shouting and crashing. Hines was seen with a black eye the following day, when he answered the door of Brown’s apartment, and when he walked Brown’s two dogs. He answered the telephone Wednesday afternoon and said that Brown was not available when someone from H.G. Rooster’s called, police said. Calls on Thursday were not answered.

Brown, known to countless friends and acquaintances as “La La”, served on the board of directors for the South Florida chapter of the NAMES Project, touring the AIDS Memorial Quilt to such far-flung international destinations as Capetown, South Africa, as well as all over the United States. While touring the Quilt, Brown was often accompanied by fellow NAMES Project board member Jerry Suarez, who is a dear friend of mine.

Yesterday Jerry told me, “Michael felt a tremendous responsibility as a gay man, somebody who saw many friends die, to dedicate his life to AIDS awareness and to work for the betterment of gay people everywhere.” In 2007, Brown received the Fundraiser Extraordinaire Award from the Comprehensive AIDS Program of Palm Beach County

BELOW: Jerry Suarez, Michael Brown, and Eileen Horan at a 2004 NAMES Project display in Washington, DC. BELOW: A slideshow of the candlelight vigil and remembrance held Saturday at H.G. Roosters in West Palm Beach, via Wes Blackburn’s blog post, Good-Bye La-La.

PERSONAL: I first met Michael in the late 80’s when I was working in West Palm Beach, but living in Fort Lauderdale, and would occasionally stop by Rooster’s for a drink on my way home. Even though I was an infrequent patron, “La La” always knew my name and would charm me with with a joke and a big smile. Several years later I got to know him better when my new job in the music industry (working for Jerry Suarez) brought me into daily contact with the folks working for the NAMES Project. Michael was a big man with a big heart and his untimely end is a terrible loss for the LGBT people of South Florida. A book of condolences is being hosted by the Palm Beach Post. Make your remembrance of Michael Brown here.