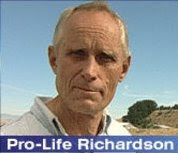 Craig Replacement Could Be Pro-Life Literally. A nutjob running for Larry Craig’s seat has legally changed his name to Pro-Life Richardson.

A 66-year-old Idaho strawberry farmer, formerly known after a previous name change as Marvin Pro-Life Richardson, is now, simply, “Pro-Life.” “I think it’s just and I think it’s proper to have Pro-Life on the ballot,” Pro-Life told the Idaho Press-Tribune. “If I save one baby’s life, it’s worth it.”

Pro-Life made the change after an unsuccessful run for governor under the Constitution Party in 2006, hoping this time to skirt the state policy that prevented him from using what was then his middle name as his name on the ballot, as the state considered it not a name, but a slogan. Officials must now recognize Pro-Life’s legal name. According to CBS News, Pro-Life will from now on run as an independent for the highest state office in each election every two years on a platform of advocating murder charges for abortion doctors and the women who seek their services.

Murder charges for abortion doctors and their patients? Idaho has the death penalty, so I think this guy might need to change his name again.