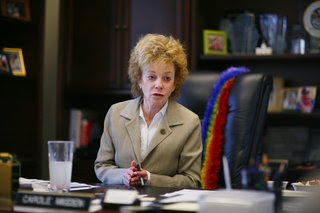 In the largest such judgment against a state politician, California State Senator (and open lesbian) Carole Migden (D-SF) has been fined $350,000 for 89 instances of campaign finance and disclosure violations and for personal use of campaign funds. Migden’s attorney claims that the violations were a result of her 10-year bout with leukemia, saying, “She was battling cancer at the time and she didn’t pay attention as she should have.”

The 35-page FPPC report says Migden on eight occasions between 2005 and last June spent a total of $16,317 in campaign funds that “conferred a substantial personal benefit” to her without having a reasonable “political, legislative or governmental purpose” as required by law.

Details of Migden’s personal spending were not included, though the information may be released later. “It’s still a pending issue until the commission formally accepts or rejects the stipulation,” said FPPC spokesman Roman Porter.

In addition to airfare and hotel stays, Migden has used campaign credit cards to make purchases at Nordstrom, Neiman Marcus, and Tiffany & Co., among other high-end retailers, according to her campaign disclosure reports.

The violations span Midgen’s time as state Senator and her previous positions in the state Assembly and with the Board of Equalization.

Under law, which allows the agency to levy $5,000 per count, the FPPC could have fined Migden $445,000 for the 89 counts, but she, Sanders and Potashner stipulated to the $350,000 fine. Migden has paid $100,000 out of her own pocket, but it’s unclear whether she will use campaign money to cover the remaining fine, her attorney said. Candidates are allowed to use campaign funds to pay fines if they are related to the committee.

As of the end of 2007, Migden had about $1 million in three campaign accounts. But recently the FPPC ruled that she can’t spend $647,000 in political contributions she raised before being elected to the Senate. Chairman Ross Johnson said Migden has already illegally spent $400,000.

Migden’s upcoming election opponent, openly gay Assemblyman Mark Leno (D-SF), raised the issue of Migden’s campaign improprieties last November. Migden responded by filing suit against the Fair Political Practices Commission, saying she was using volunteer bookkeepers unfamiliar with state rules and should be entitled to use the money as she had.

UNRELATED: In May 2007, Migden rear-ended another vehicle after forcing two drivers off the road, distracted, she claimed, by answering her cell phone. In 2006 Migden had voted for a state bill that outlawed holding a cell phone while driving. That law went into effect shortly after Migden’s accident.

VERY UNRELATED: I met Migden several times during her tenure on San Francisco’s Board of Supervisors, but most memorably in 1998 at a vigil and march marking the 20th anniversary of the murder of Harvey Milk. Migden was then in her first term in the Assembly and I took an opportunity to speak to her about SF’s show-boating new mayor, Willie Brown, who’d just left the Assembly after many years as its Speaker.

Migden (my rep in the Assembly) listened to my two sentence question/complaint, then turned her back on me with a dismissive “I love Willie Brown.” Wrong place, wrong time, maybe. But funny how things like that stick with you. I wasn’t at all surprised a couple of years ago when Midgen was voted “Worst Senator To Work For” by capitol staffers and was named “Sacramento’s Scariest Boss” by the SF Examiner. Migden has also been repeatedly reprimanded in the legislature for being a total bitch. Seriously. But maybe that’s what it takes to be a successful female politician. Ahem.