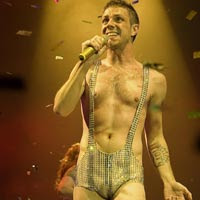 – A musical version of Armisted Maupin’s Tale Of The City will be coming to Broadway with music written by Jake Shears and John Garden of the Scissor Sisters. Shears will also write the lyrics. Look for Tales to debut in the 2009-2010 season.

– Kathleen Turner is making her directing debut with Crimes of the Heart at the Roundabout Theatre Company’s Off-Broadway venue, the Laura Pels Theatre, through April 13.

– Elton John and John Lee’s Billy Elliot will be making its Broadway debut at the Imperial Theater. The first preview is set for September 17th, 2008 and the opening will be October 16th, 2008. The show has been a huge smash in London for three years, grossing over $100M to date there.

– John Lithgow will present his new one-man show Stories by Heart at Lincoln Center April 20-June 2, with an opening date of May 12. Jack O’Brien will direct.

– Entering at #26 on the Billboard 200, the cast album for The Little Mermaid makes the second-highest debut in 25 years for a Broadway show. Only Rent debuted higher at #19 in 1996. Mermaid is number one Top Cast Albums.