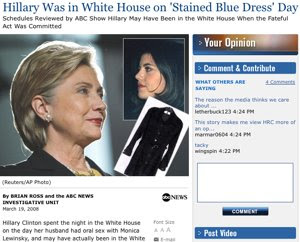 Hillary Clinton just released her 17,000-page schedule from her days as First Lady to the National Archives. And already an ABC News “investigative unit” has pored over the pages to discover the shocking news that she was actually at home at the White House on the day of the famous Monica Lewinsky blue dress incident.

Hillary Clinton spent the night in the White House on the day her husband had oral sex with Monica Lewinsky, and may have actually been in the White House when it happened, according to records of her schedule released today by the National Archives.

An initial review by ABC News of the 17,481 pages of Sen. Hillary Clinton’s schedule as first lady, released today by the National Archives, also finds significant gaps in time and many days containing only “private meetings” at the White House with unnamed individuals.

The public schedule for Sen. Clinton on Feb. 28, 1997, the day on which Lewinsky’s infamous blue dress would become stained by the president, shows the first lady spent the morning and the night in the White House.

Whoop deefucking doo. Garsh, ABC News, what could your motives possibly be?

Previous Blink, Blink
Next The Taxi Of The (Ugly) Future