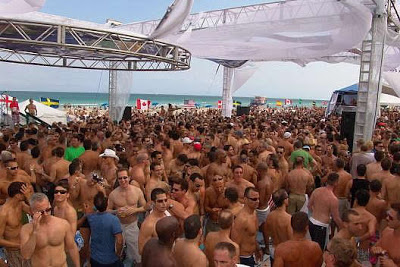 The ad for the Winter Party that appears on this and many other blogs this month has been nagging me to mention that despite the recent spate of stories about the dwindling of gay nightlife, the Winter Party Festival continues to thrive. This March will see the 15th annual Winter Party, an event I’ve attended more times than any other event in my life, nine times in all, making regular treks back to South Florida after I moved to San Francisco, and twice since I’ve been in New York.

Nationwide, the circuit scene is quickly winding down. As Steve Weinstein noted in an Out Magazine article titled Save The Last Dance, “Where an earlier generation saw the drug-fueled all-night dances as liberating, those in their 20s are as likely to view them as archaic throwbacks that bear little relationship to the way they live their lives.” So as the original circuit party boys “age out” of the scene, younger gays have scant interest in replacing them. And the parties are closing up shop in droves.

Others struggle to survive, like Philadelphia’s Blue Ball, which moved from January to May, and Washington, D.C.’s Cherry, which keeps changing sponsors and venues.

So why, in the face of all this (generally agreed to be good) change in the way young gay men socialize, does the Winter Party buck the trends and continue to thrive? Obviously, their hugest draw is that while the rest of the country shivers, the main Winter Party event (the largest beach party in the country) takes place in toasty subtropical weather and plays out against the gorgeous backdrop of South Beach’s Art Deco District.

But now run by the National Gay & Lesbian Task Force, the Winter Party has morphed over recent years from that single perfect beach party to include a week-long series of events with broad appeal to those both in and out of the circuit scene. This year there’s an LGBT family picnic, a fundraiser for the South Beach AIDS Project, a fashion show, a lesbian jazz brunch, a dinner party to support the transgender community, and the unveiling of the Gay American Heroes exhibit, a “traveling memorial that honors LGBT persons who have been murdered because of their sexual orientation or gender identity.”

Unlike those events listed in Weinstein’s “party graveyard”, somehow the Winter Party organizers saw the writing on the wall and reacted. I asked Task Force head Matt Foreman about the changes his organization have brought to the Winter Party:

“We’re extremely proud that over the four years the Task Force has been responsible for the Winter Party Festival we’ve broadened its reach by adding programs for people of faith, young people, transgender people, and women. We’re proud that the festival continues to be 100% of, by and for our community with 100% of its proceeds staying in our community. In fact, so far we’ve generated nearly $650,000 to support local organizations serving Miami-Dade’s LGBT community. And finally, we’re proud to be preserving and building a family of events that celebrates our sexuality, our diversity, and our community.”

Since its beginning, the Winter Party has raised over $1.6M with two-thirds of that staying in Miami-Dade County to benefit a broad array of local LGBT charities. I’ve always contended that the volunteer-run charity parties are somehow the most fun. It’s just a general vibe that I get. (Another example would be Folsom Street Fair’s fantastic Real Bad party.) The hot-bod scene is there at the Winter Party dance events (see the photo at the top of this post), but the recent inclusiveness of those outside of or uninterested in that milieu is surely at the core of their continued success.

As I’ve got friends that have been tirelessly toiling for the Winter Party for many years, I’m happy to pimp their good work on this here website thingy. Just don’t deluge me with requests to pimp your party. This one is, happily, very personal.