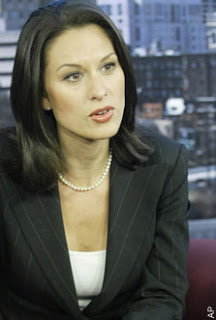 Charges were largely dropped this week against former Philadelphia CBS anchor Alycia Lane in her traffic altercation case in which she allegedly called a female NYPD officer a “fucking dyke” and struck her in the face. Lane was fired from her TV job after the incident.

The original police complaint against Lane said the female officer suffered lacerations and swelling on her face. This week in court, however, the Manhattan prosecutors office reduced the charge to obstruction and harassment, both misdemeanors, saying that the injuries sustained by the officer did not rise to the level of physical injury that a felony charge requires. In addition, Criminal Court Judge Dina Douglas said that if Lane does not get into trouble for the next six months the charges could be dropped.

NYPD’s gay cop organization, GOAL, is outraged. “If people cannot control their anger and hatred and choose to confront and injure a police officer, then what chance does the everyday citizen have of expecting a general sense of personal safety in our city?” said GOAL executive director Thomas Verni.

Previous Money Talks For Puerto Rico’s Gays
Next If You’re Crazy And You Know It,
Clap Your Hands