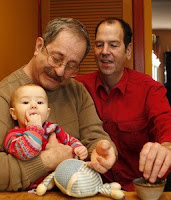 “Lesbian grandmother” or “gay grandpa” used to sound like a contradiction in terms. But now gay grandfolk are a quietly emerging demographic – men and women who married in the 1960s and ’70s, had children, and came out later, sometimes only after their children were grown.

There’s still no grandparent equivalent of the children’s picture book Heather Has Two Mommies. But a recent novel, Grampa Jack, chronicles a gay grandfather’s fight for custody of his 6-year-old grandson. And an online boutique sells kids’ T-shirts emblazoned with the words “I love my. . .trailblazing. . .woman-loving. . .out and proud grandma.”

“There is a growing number of gay grandparents who are looking for ways to explain to their grandchildren who they are and who they love,” said Jennifer Chrisler, executive director of the Family Equality Council.

Even the youngest gay and lesbian grandparents, those in their early 50s, can remember the Stonewall riots that kick-started the gay civil rights movement in 1969. In 40 years, the world has changed. And so have they.

I have a couple of gay grampas in my circle of friends. They are all much older than me, of course. Uh, although, if a certain incident had gone a different way for me in 1979, I’d guess I’d probably be one now too.

Previous Do You Double Dip?
Next Huckabee’s Girl